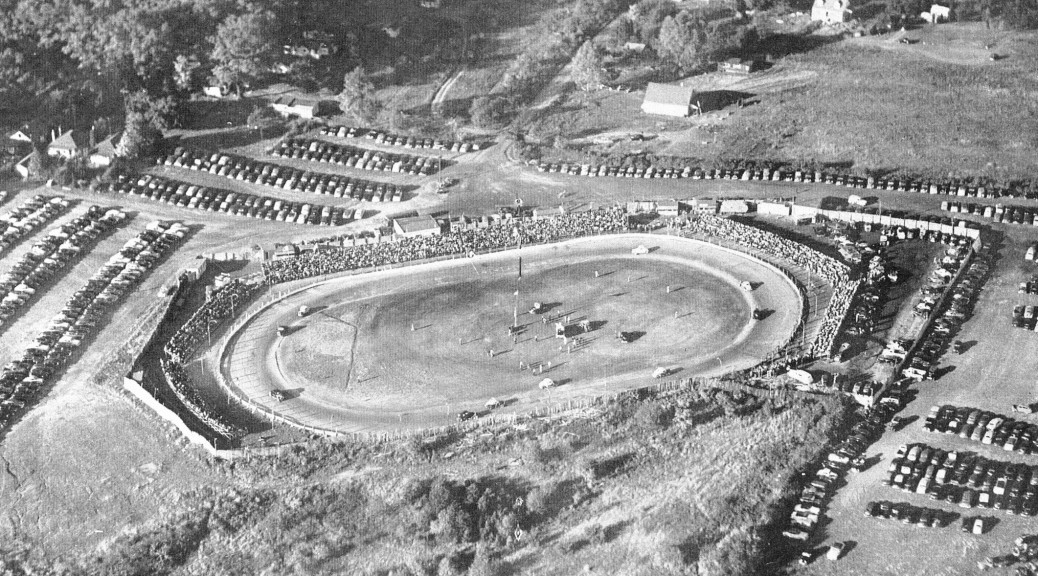 It was 1937 and partners Ed Moll, Johnny Sweetwood, and Nicholas Pellicotti had leased part of the former Sanatoga Park parking lot  from the  Pottstown Transit Company the  owner of the land at that time.   Construction of a one fifth mile dirt track began shortly after.   The track, dirt and slightly banked, was ready for midget racing and the inaugural race was scheduled for May 7, 1939.  After a calamitous opening event which saw a lot of cars overheating and losing their engines due to the dust and dirt, the promoters Nicholas Pellicotti and Johnny Sweetwood cancelled the next race until May 21.  During this time the slight banking was removed and the track had an asphalt cover laid on it.  This was to be the configuration of the track for the rest of its life.  On May21 it was again decided to postpone the races until Memorial Day (May 30) to be sure the track had hardened enough for racing.  Midget racing continued until WWII and resumed again in1948 promoted by Carl Spatz.

The first stock car race took place on June 15, 1949 and was won by Claude Bitting, of Reading.  George Marshman took over promotion of the track in 1951-1958.   Marshman was a promoter extraordinaire who did almost anything to attract a crowd and it usually worked.  Of course the Pottstown Stock Car Racing Club raced on Wednesday and Saturday nights but all other times were open.  Marshman promoted Joie Chitwood Auto Dare Devils, three-quarter midget races, “The Sensational Destruction Derby”,  and a destruction derby featuring a Sherman tank, and even drive-in movies.

In its closing years the Speedway was best known for its stockcar racing although some midget events were also presented.  After WWII people bought new cars since automobile production had been held up during the war.  As a result a lot of 30’s cars were available for cheap prices.  After removing the fenders and hoods and welding some reinforcing bars on the front end, they were ready to race.  There were no roll bars, seatbelts or shoulder harnesses. The only protection was a leather football helmet.  After a few years roll bars became mandatory.  Racing at this time was best described as “racing for the fun of it”.  Small purses of maybe $50.00 were awarded to winners.  Popular drivers were sometimes paid an “appearance” fee.  Fifty to sixty miles an hour was about top speed and there was a lot of pushing and shoving on the small track.  All of which added to the excitement of it.  The track closed on September 12, 1958.

Today the track area is mostly owned by the township and consists of a small playground, baseball field, and soccer fields. However, if you are adventurous and you take a walk into the weeds and wilderness to the East of the ball field you may find a patch of asphalt that was a part of the fourth turn.