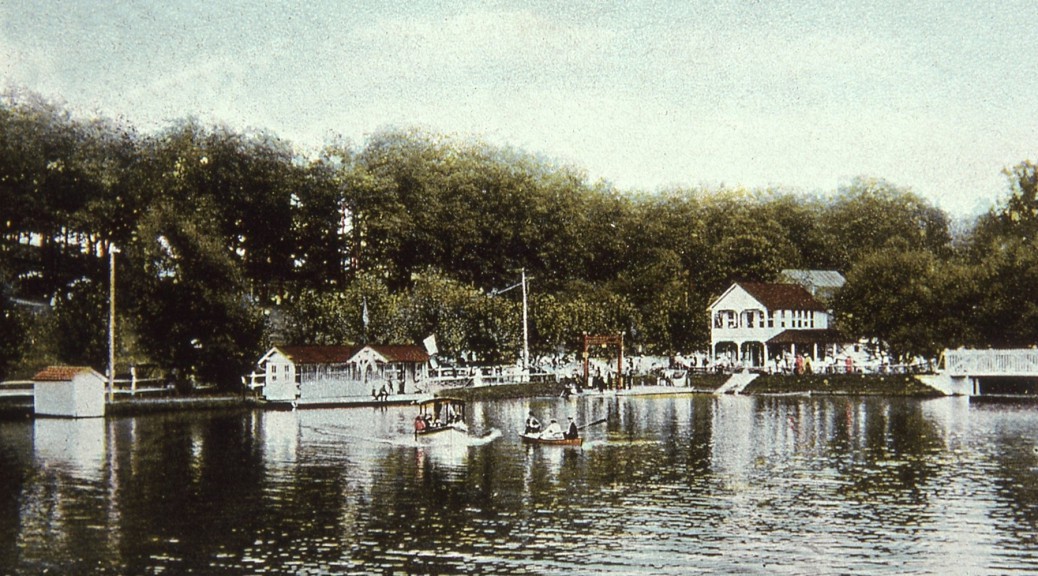 Sanatoga Park was built in the mid 1890’s.  It was another “trolley park” owned and operated by the Pottstown Passenger Railway Company as a destination site to give people more incentive  to ride the trolleys.

The main attraction was a beautiful lake that was once 300 ft. wide and over a half mile in length.  There was plenty of room for a swimming area and for boating and canoeing, which was a popular activity in those days.  Boats and canoes were available for rent, and the Naptha Launch  carried passengers up and down the length of the lake.

Built on the hill overlooking the lake was the Park restaurant, with a rustic pavilion attached that could seat 300 persons.   This later became the Dance Pavilion, which attracted  as many as 1,000 dancers on Sat. nights to enjoy the music of name bands.

At the turn of the century, the Alpine Dips roller coaster was built. It  was nearly a mile in length and dominated the hillside.   Built by the Philadelphia Toboggan Company, it was  the very first ride of its kind built in an amusement park.  Other amusements were also available, including the Palace Carousel, the Whip, the Airplane Swing, and Hilarity Hall Fun House.

There were also more games and entertainments along the Midway which ran diagonally up the side of the hill.  These included the Shooting Gallery, the Kentucky Derby, the High Slide, Pitch Till You Win, Palmistry and many more.  All in all, the park encompassed forty acres.

By the end of the “Roaring Twenties”, the park had begun to decline.  In the late 1930’s the roller coaster was sold for dismantling to Amandus D. Moyer, who founded the A. D. Moyer Lumber Company in 1939 by selling the used wood from the Alpine Dips.  In 1944, the Pavilion burned to the ground.  It had been the last building standing.  The once glorious Sanatoga Park was gone.

Today there has been a band shell erected, and there is regular musical entertainment provided throughout the summer on Sunday evenings.